Garden of the Gods Sunday 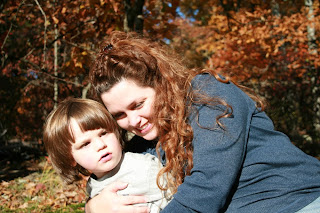 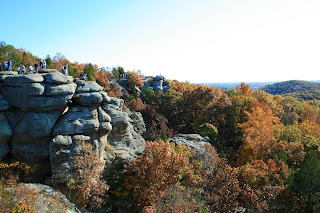 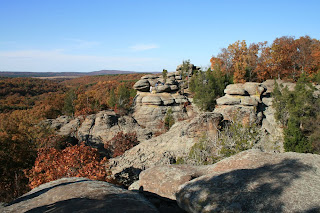 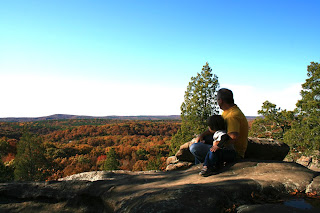 Sunday in our area was just spectacular. If it weren't for those annoying little lady beetles that flock to you, I'd say it was perfect. My husband thought it would be a good day to drive around and see the fall leaves which are about peak here. I agreed it would be nice to escape for little while from all the sadness I've been feeling. So we went about 2 hours southwest of us to Southern Illinois to Garden of the Gods in The Shawnee National Forest. It's really kinda strange the way the land goes from being pretty flat to hilly to these cliffs. If you didn't know the park was there, you would pass it by because there is nothing from the highway to indicate what is beyond the small hills. We took Hwy 1 to get there. Passed the Old Slave House (which is now closed to the public). Then turned on Pounds Hollow Rd to get there.
It was not our first trip to the rocks, but the first time to see the leaves like this. The first time Daryl took me there, we took a picnic (we were romantic way back then) and ate on the many large boulders that abound. After we had been hiking around a bit I finally asked him "who painted all these rocks?" Well, he got a real hoot out of that. Turns out these rocks had moss growing on them. Not any kind of moss this then city girl had ever seen. He later told me he thought to himself that day "well she's not real smart, but she's pretty to look at". Hmmpf.
Anyway, a whole lot of other people thought it would be a great day to see it, too. It was as crowded as I had ever seen it. They used to let you propel off the rocks, but so many people have died or got hurt there that now it is not allowed. I just read in the paper maybe a month ago a woman fell to her death there.
After the short visit to Garden of the Gods, we got back on Hwy 1 and headed to the ferry. We were actually on a trip to Daryl's mom's house in Paducah, KY and took a couple bypasses on the way. We stopped at the Cave-in-Rock State Park before we took the ferry to Kentucky. I'll post about that tomorrow. Enjoy the pictures.
Posted by Jaime Haney at 6:20 PM

Email ThisBlogThis!Share to TwitterShare to FacebookShare to Pinterest
Labels: day trip, Garden of the Gods, Illinois