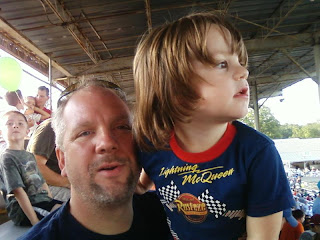 We went to the quad races at the Vanderburgh County Fair this week and here is a cute picture of Asher and Daryl. It was Asher's first time and he was so excited! He keeps asking me if we are going back to see the motorcycles race next. We're not, they got rained out, but we might try to go to the demo derby Saturday night if it doesn't get rained out. He will flip out for that! He has made car noises ever since he could blow bubbles as a baby. His motor never quits.
I've been thinking of trying to pick up a paint brush and pencil again when I have a few moments instead of vegging on the couch... we'll see. I have all kinds of ideas floating in my head.
Mom and I went to church Wednesday night. It was very moving. Brother Roger Tab is the pastor at Grace Assembly and gave a fantastic sermon. Mom was annointed with oil and prayed for and I had such a feeling of peace afterwards. God was moving that night. I believe He has healed her and choose not to believe anything different. Only God knows what our future holds for us, after all it is all in His plan.
Posted by Jaime Haney at 10:37 PM No comments: 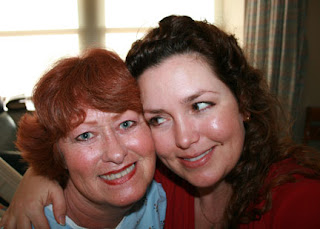 Here's a picture of my beautiful mother and myself. I think I took this the day she got to go home from the hospital. I am feeling so overwhelmed these days. I feel guilty taking this time to blog and putt around on the internet while my son naps. I have to hit the Walmart when he wakes up, oh joy. I have so much housework that needs to be caught up on, but I am tired and wish for how it used be, before we knew Mom had cancer. When I spent my time luxuriously surfing the net or creating art and not worrying about her and whether I am spending enough time with her. I live 45 minutes away so it's not easy to just pop on over, especially with my wild child. When I am at my parents house, I am clearing out rooms that have accumulated lots and lots of stuff from an admitted "hoarder".  All the while, trying to keep reins on my kid who is increasingly wilder as the day goes by especially if he has not had a nap. My dad is still working full time and now is also dealing with this cancer. He relies on me to help with things, it is daunting. He doesn't have much patience for the antics of a 3 year old either. More stress.  Oh my gosh, I just realized how much of a whiner I sound like! I should be grateful for everyday I get to be with her and not worry about my petty little inconveniences. Tell that to my 3 year old who doesn't understand why he can't play outside and just stay home anymore!
Posted by Jaime Haney at 4:11 PM No comments:

Cancer is a real monkey wrench

I have not blogged since I found out my mom has cancer on July 1st. I'm trying to settle into keeping 2 households going and it's tuff. Needless to say, I don't have much time for creating any art.
We are staying upbeat and have our faith. I believe in healing prayer and that God can heal her. We are doing a lot of praying these days. I feel like I'm getting a petition going to send to God to heal her! ha ha.... But God is merciful and only he knows when it is time to go home.
Please pray for my beautiful mother along with me. She is just 64 and has a lot of living left to do!
Posted by Jaime Haney at 2:59 PM 2 comments: