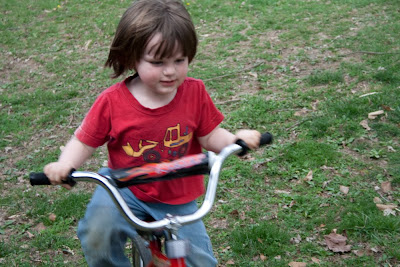 Well I've been catching up on my favorite blogs tonight and thought I'd post something just real quick. Nothing really important... just little things from my day.
Pretty day today, but chilly and breezy. So I stayed in a while and worked on a new piece for GeeJayCreations. It's a montage for Vietnam Soldiers. Gale's husband was a Vietnam Vet and she wrote it for him a while back. I'll post it in a day or two. I also finished up a card for Mother's Day. It has Gale's poem about single moms and is real cute.
I can't believe Mother's Day is catching up so quickly! I better be listing it on Etsy asap! While on the subject of Etsy. I actually forgot to pay my Etsy bill this month on both of my shops! Yikes! I'm going to get kicked out or thrown into Etsy jail. Surprisingly, there were no late fees.
Not sure if I mentioned it already, but Asher got his first bicycle for his 4th birthday this March. But today was the big day that we all went riding together on all of our bikes in town (New Harmony, IN). We went to a park that has a playground in the center of what resembles a racetrack with blacktop around so you can walk, ride bikes and believe it or not drive on. The second he saw the playground, all bets (and bikerides) were off. We did talk him in to one lap of biking and of course he was so excited that he fell right away on the blacktop. Splat. That one wasn't too bad, but then he did it again. and again. This time crying and holding on to me, he finally understood that you have to look forward while you ride and not backwards, I hope.
The hubs had to go in tonight around 5pm so Asher and I went to Wallyworld to get groceries and poke around. He managed to shake me down for 2 new construction toys, another backhoe and another dump truck. This kid has more construction equipment than Quakers got oats. It's partly my fault, too. Oh well. But I getting tired of not being able to sit on my own couch because it is his "road". He really needs to lighten up. Only child thing.
Oh! and I saw a shooting star tonight on my way home! They make me so happy!! Of course I made a wish... but I can't tell you what it was or it won't come true. So you'll have to just wonder, sorry! haha
Just so you know, Monday and Tuesday's moon are in the best time to plant, lunar-ly speaking that is. The moon will be in Cancer starting early Monday morning, and Cancer my friend, is the best time to plant. Now go out and plant something!
later, taters
Posted by Jaime Haney at 1:05 AM