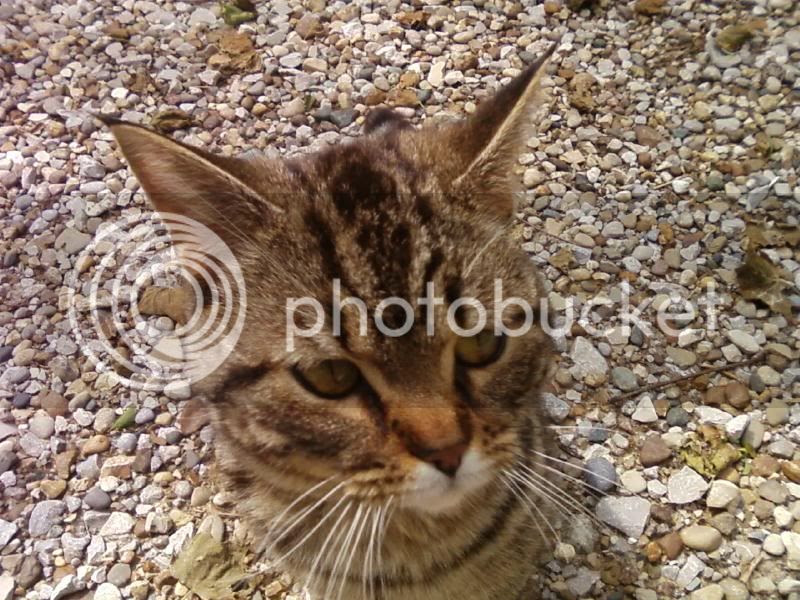 I've had an awful day today. I said to goodbye to a new furry family member. I didn't even get a chance to introduce everyone to Buster Brown, a stray kitty that found me. Now it's a memorial for the sweet boy that could've been. I took these pictures when I found him the first day with my phone, just down the road from our house a little ways. I saw him lying in the gravel and I stopped and rolled my window down and talked to him. He talked back and then came out from under the brush, not scared of the van running with me saying "kitty kitty kitty".

Today, sadly, I took him to the vet because the last few days he has looked not well at all. He's not been eating for a few days and the last time I saw him drink was Monday. When I found him he looked as though a dog or something had got a hold of his tail. It was missing fur and had bite marks. He was not holding it up, but it did move. I washed it with peroxide and sprayed it with Bactine. I figured it would heal on its own in time.

He ate hardy for a few days and drank a lot. Then he dissappeared for a couple days. When he returned, he didn't look as spry. He slept most of the time and I thought maybe his tail was infected. So I gave him some antibiotics I had and hoped he would bounce back. This morning was the 4th dose of the antibiotics and he looked as worse as ever. I noticed his mouth and tongue were yellow and he was dehydrated. He smelled strange, sickly. I stewed and worried for a while as to what to do. I called people I thought could give me answers and finally took him into the vet. Money is a little tight and I was holding off on this. I finally decided I could not take it anymore and would just put in on the credit card.

When it was our turn, the vet was shocked at how weak he was. Buster was in liver failure. It might've been kidney failure, I honestly can't remember in between sobs. He told me there was a 90% chance this cat would die in a couple days. He said that if it were his cat, he'd put Buster down. With a heavy heart, I decided Buster shouldn't suffer any longer. It broke my heart to say yes, and as the vet walked out of the room to get the papers ready for me to sign, Buster got up off the table and walked over to me and touched his head to my chest. I was blubbering by now and the vet couldn't understand me as I asked him was he sure this was the right thing to do. I can't help but feel Buster was getting up to get close to me as to say don't do it. My friend comforted me later and said maybe that was Buster's way of thanking me. I still don't know and it's eating at me. I've done nothing but cry all day. I've got Asher upset because he sees me crying and I didn't lie to him when he asked why the pet carrier was in the van. It's just been a rotten day. I know I could've let nature take its course, but I just couldn't bare to watch him slowly die.

Even though I knew Buster Brown only a very short time, I can't help but feel so devastated.  I just can't stand it that I couldn't do anything to save this kitty. The vet said his tail was not the reason why he was so sick. He thought maybe feline leukemia or feline aids possibly. That's why it's so important to get our pets the shots they should have. I know most of you are like me and think of our pets as family.  So today I am mourning my Buster Brown. Sweet kitty, good bye. 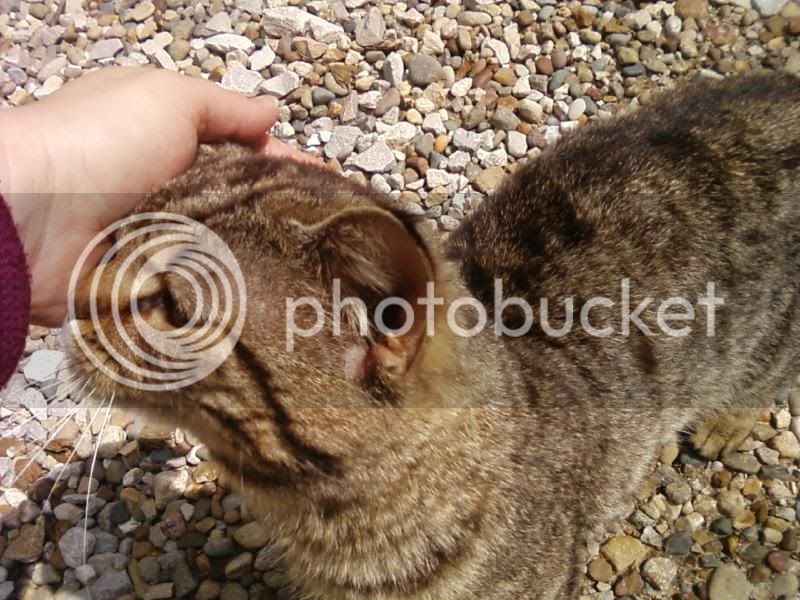