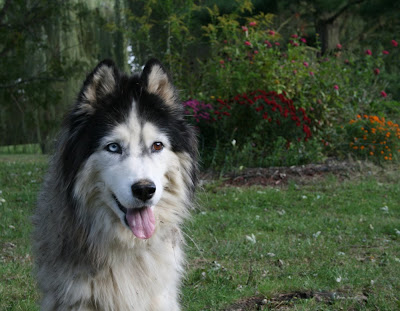 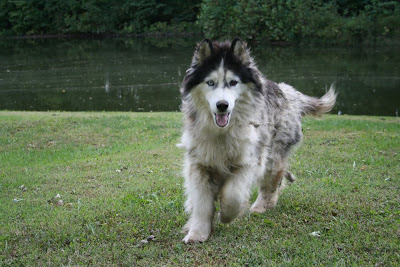 I went to a craft show today and saw a lot of Halloween crafts being bought. But I also saw a lot of stuff that looked like it was just "assembled" and called a craft. By the size of the show, which was way down from what I remember it being, I'm guessing they are allowing just about anybody in that has their $35 or whatever it costs for a booth there. I'm not sure that some of the stuff I saw would be considered "hand crafted", it looked like it belonged more in a flea market. But I did see a lot of great hand made items. There are so many creative people in this world it just surprises me that we buy junk mass marketed to us and made in China. I wish more people would support these crafters, artists and dreamers (including me!). We offer a much more personal product than anything made in China.
Enjoy the pictures of my little "girl" Banshee Wayne, a Siberian Husky. A real sweetie. She is 10 and a half years old and is the happiest dog in the world since we moved out in the country 5 years ago and she has free reign to run anywhere she pleases. That's why she looks a little less than show quality :) she makes use of the fields and woods. haha
Posted by Jaime Haney at 6:21 PM