I'm writing this as my poor dogs are barkin' and I'm not talking about K-9's. I was in my greenhouse for 6 hours today on the concrete transplanting more than 350 tomato plants. Today we hit a record high of like 86 degrees and my thermostat told me it was 111 degrees in there where I was at. All fans ran non-stop. The number of tomatoes keeps growing because as extra seeds have sprouted, I can't bear to clip off, so I carefully dig it out like a surgeon. But I mainly had to transplant because I am hoping changing the soil will correct this miserable problem I have with them this year. Let me share my tale of woe with you and then I'll get to my goodies I bought this past weekend at the art show.
For those of you who may not know, I have a greenhouse and now for the last 3 years I have sold heirloom tomato plants that I grow from seed. Now I've been growing tomatoes from seed for 20 years so I'm no novice in this department and I usually never deter from the tried and true method of sewing them in cells of seed starter mix under lights. But this year, I thought I'd try to get a leg up and up over myself by avoiding the time consuming process of potting up. If I'm growing just for myself, I don't pot up, just pop 'em in the ground and stand back. But if you're selling these babies for $3 a pop, people expect a little sumtin sumtin if you know what I mean. So I pot them up to hopefully get a larger plant and it's also easier to sell individual plants as opposed to the 6 packs. So my plan was to go to this great gardening web site, gardenweb and see if anyone had re-invented the tomato wheel. I caught up with someone, who will remain nameless, who seemed to know what she was doing and I followed some advice that I shouldn't have. I should've listened to my gut, but that's another story. She plants her seed into decent size cups using not seed starting mix, but potting soil with fertilizer in it. She claimed it was so mild, it wouldn't burn them up. hmmmpf. Well, I'm not sure what kind of soil she was using, but I can tell you that mine did. I even as a safety net, put the soil at the bottom for about 75% of the mixture and used the soilless potting mix as the 25% top part that the seed went in to. So I helplessly watched my little seedlings struggle to start and them some died. The others have literally ceased to do anything. So with 5 and a half week old seedlings looking like they are 1 week old I am sweatin bullets. Why didn't I replant you ask? I did, and did and did. I replanted more seed than I ever have. I even had to order more seed. My problem was, I stupidly used the same soil concoction. I kept hoping that as soon as they developed their true leaves they would benefit from the fertilizer and take off. They didn't. So instead of starting from square one, which would be replanting using the right medium, I decided to try to salvage what I had and transplant into a better mix. I carefully removed each and every seedling from its pot and carefully shook off the offending soil to put it in good tried and true mix called Promix. See the poor little babies here. Only problem is when you transplant it stalls the growing, so now I'm still sweating bullets. I have my largest order this year, so I am praying and hoping and doing what ever else I can think of to get these toms going. Please say a little prayer for my tomatoes, they are due to be ready for pickup May 1st!!
Sorry, I know that was a book and boring for non gardening people. So back to the art show I attended with my dad last Saturday. It was an excellent show and really most every artist was great. It was a juried show, so you expect greatness but every once and a while something gets in that makes you think they must serve on the board or something. I won't mention names... because I hope I'm not thought of in the same respect! haha
So here's what I bought: 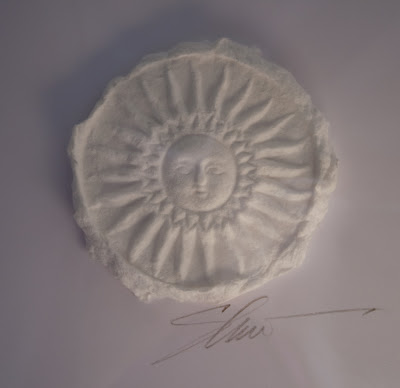 Paper art by Betty Shew - she makes a mold out of clay and presses hand made paper pulp (I guess it's pulp) into her molds and voila! I was downright shocked at how low her prices were. I guess because she can make many from one mold. Her work is so dimensional. Some of it was framed in shadow boxes and some was just like pouring out of the paper... so sculptural! Beautiful.

Seiz Pottery Nice guy and great organic looking pieces. I found some inexpensive magnets that I love and only $3 each. Nice work and pretty colors. 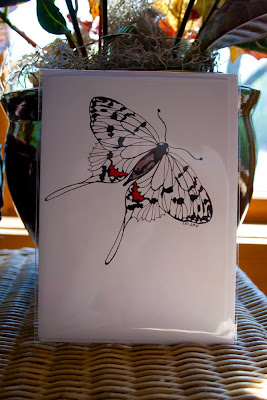 Silhouettes Etc. Incredible paper work and all done with scissors. She calls is silhouettes but my dad who is also a paper artist, called it Sneerandschnitty. I know I massacred the name here, but that is how it sounds. She said almost no one recognizes the silhouettes as that and was impressed with Dad. I think his head got a little bigger from that... haha. She had this one piece that was a feather and you would swear it was a real feather. Very talented. Said she uses surgery scissors. I wanted an original piece from her but my wallet had shrank by the time I got to her... but her pieces are worth it. I got a greeting card that was a print. Still very pretty but you lose the sculptural effect.
There were so many pieces that I would have loved to purchase but I just couldn't afford them. I was amazed at how many of the artists there either didn't use Etsy or had never heard of it. One lady was afraid of copyright infringement... which I reminded her can happen on or off the internet.
Some of the biz cards I managed to pick up are:
Jin & John Powell, Sculptors
Garry McMichael mixed media
Luna Silks hand painted fabrics
Randall Spangler - painter, illustrator - super nice guy
Catworks - digital art for cat lovers
Beads of Fire - original glass beads and jewelry
There also were many that I just neglected to pick up a card for :( wish I had now.
Well, if you've made it this far... Wow!! thank you! :)
I had a request to show my dad's work and I love that idea. I'll be doing that soon. He makes paper sculptures, but actually hasn't made any in a while... but plans to start again and with bigger and better ideas. We hope to attend art shows together. How cool would that be?
Posted by Jaime Haney at 10:36 PM