Memories of the Zinnia 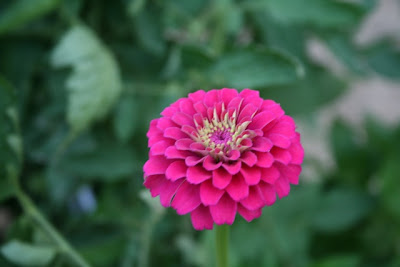 Today has been my mom's birthday. She would've been 67. I was just telling a friend that I've gotten out of the I can't believe it stage and moved more into a numb, thick and alone in my thoughts of her stage. For those who don't know, she died of cancer in October 2009. Read about her here.

Zinnia's were one of her most favorite flowers. Every year she would have her seeds that she would've saved from the previous year and some she couldn't resist and bought at the stores. She would procrastinate or lose them (the nut didn't fall too far from the tree on that one) and it could be as late as August and she would still plant them. I would tease her and tell her they wouldn't even bloom for a couple months and she would smile and say laughing "so I'll have flowers at Halloween!" I miss her optimism. I just miss her.

So every year I plant zinnia's for Mom. I have more zinnia's but I didn't get any good pictures of them. So many things I do I still think to myself, Mom like's that or Mom would do it this way. I still imagine her voice in my head talking to me, answering my questions.