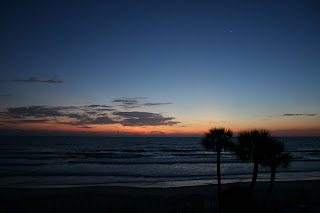 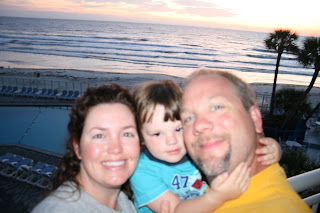 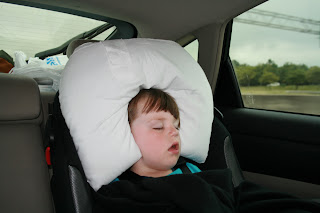 We got home late Friday night and I've managed to just get two loads of laundry done and put two frozen pizza's in the oven. I tossed the housework aside to take a short trip to town in New Harmony to check out the Kunstfest. Asher (my boy) and I split a German Bologna sandwich, kettle chips and a Diet Coke. We walked around enjoying the sounds of music everywhere and the delicious smells of the german food like kuchens and others while looking at all the stuff people were selling from artwork to flea market junk. Of course I did all this only after bribing my 3 year old with many a lollypops and a long trip to the playground afterwards. He did really well and I'm proud to announce that he peed in his first porta potty ever today with success. We have been potty training for about two weeks now and he's doing great. He thinks it's great to pee in the new sink as he calls it (the men's urinal).
Our annual trip to New Smyrna was great but as always, too short. It took us 14 hours from our home in Indiana to get there and surprisingly the same back. We always leave for Florida at night. We trade off driving most of the time. This time my husband drove most of the way and got caught in Atlanta doing 79 in a 55. ouch. That is gonna hurt. I'm not sure what it's gonna cost, but I'm sure it will about make me cry. Not to mention once the insurance company finds out. The motorcycle cop that pulled us over looked like he belonged with the Village People. He sported a black tight cap on his head and his uniform was extremely tight. I had to laugh a little when I saw him. Of course I wasn't laughing after I saw him leave. Those GA cops don't play around. They also don't give out warnings. :(
We ate at a little local place that is new this summer called That's Amore. It was fantastic. We tried the Philly Cheese Pizza for something new and it was great. It is one of those brick oven joints opened by a local kid named Chad I was told by our friendly waitress that was from New Hamphire. I hope they make it, we intend on trying something different next time. We also attended one of those "one hour seminars" to try to sell you a time share. After about 3 hours we finally made it through 5 people trying to sell us on the idea but did walk out with $100 gift card and no Vacation Voyages. Can you believe they had Jane Seymore as their spokesperson? They also tried to tell us that she is a member and bought the package so her family could stay in nice places as she traveled for shoots and stuff. Yeah, right. She's got to be loaded and she can't afford to pay for family to stay at a 5 star place? Puuleeeze.
I've got an art show this next Saturday in Evansville, Indiana called Funk in the City. I'm no where near ready, but plan to attend anyway. I'll be booth #127. Maybe I'll be a creative super hero this week. Somebody light the fire.
A quick note about the picture with Asher and the head gear. When he falls asleep in the car seat, his head is always slung low and seems to be cutting off some oxygen. So I stuck my travel pillow on top of his head to keep it up and steady! Genius, right?! ha ha. He will hate me later for this picture.
Posted by Jaime Haney at 10:05 PM