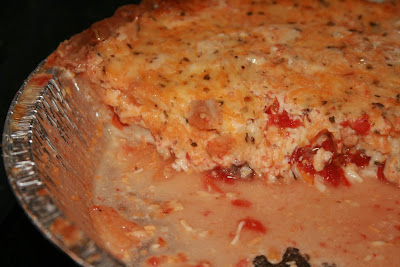 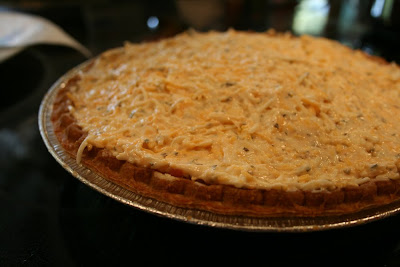 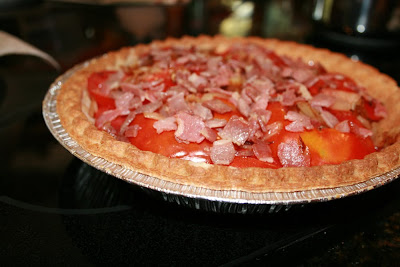 Well my mom has been asking for a tomato pie all summer and last summer, too. She raves about this tomato pie her friend Tresa makes. So, this year being the dutiful daughter I am, made her one. Yesterday to be exact. I planned to take it to her for supper. First it took a lot longer than I thought it would. After looking for the perfect recipe online for who knows how long I settled on a Paula Deen recipe from recipezaar.com. Now I consider myself a competent cook and felt like I could improvise a little on this, I mean come on how can you screw up tomatoes, cheese and spice? So I got fancy and added sauteed onions that I made from the grease of the bacon I fried up to add to it. I was quite pleased with myself. I let the tomatoes drain in the colanders all in my sink and on plates for a couple hours determined to not have a soggy crust like the others had complained about on the reviews. I even dabbed them with a bunch of paper towels, these were really juicy tomatoes! It just was coming together beautifully. I finally got it in the oven and anxiously awaited. While I could smell the pungent smell of maybe just a little too much italian seasoning I began to let a little doubt creep in. My son, walked in and asked me what I was making and I told him Tomato Pie! He just wrinkled up his 3 year old nose and said "Yucky! I like apple and nanna pie, Mom". I didn't let his negativity get to me. But by the time the timer went off and the smell did not get any better, I was wondering if I had just wasted 4 of my prized tomatoes. But oh my! How pretty! I took many pictures. I wanted to be prepared to brag about it here and on facebook, you know. After all this, it was late and I didn't go to my mom's with her supper. I thought well, it'll just be even better tomorrow, all the juices and flavors will meld together and I'll be a hero on Thursday! So all day I waited until I could take it to her and prove what a fabulous cook I had become. Oh hurray! My uncle was there, I could show off for him too, as I knew he too loved tomatoes. I re-heated the pie for what seemed an eternity and finally after checking umpteen times pulled it out after I thought the crust was starting to burn. My doubts were kicking in again as I smelled burnt crust and the now extremely strong scent of italian seasoning. But... it was a beauty to behold! I sliced into it for the first serving to my uncle. Ok... a little runny, I'll admit. Then I plate up Mom's and mine. I'm looking in anticipation at my uncle, awaiting my praise. Well? Do you like it? I got a very un-hyped up "yeah, it's alright, it's a little doughy". Ugh. The "alright" answer. That's as good as my husband calling my food "filler" when I try a new dish and asked him how he liked it. This was not going as I had envisioned it. My mom was silent in the living room. I couldn't see her. I start to eat mine... ewwww is all I can say. No wait, I can say ewwww... what nasty foul smelling muck.
So my friends, learn from my mistakes and please don't try this one at home. If you notice half the pie is missing. That is because I was just so sure that everyone would just scarf this stuff down that I handed out very generous portions to the three of us. As for the rest of the pie, it will sit in the fridge awaiting my mother in law this weekend. She can't stand to throw food out, so I know she'll at least eat it ;)
Posted by Jaime Haney at 11:14 PM