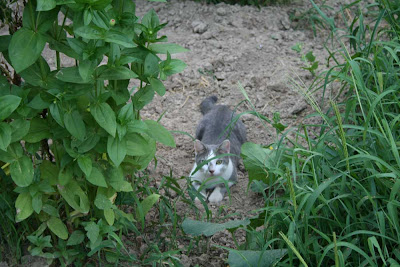 I've put off this post for over a month now hoping if I didn't talk about it, he would return. Writing this makes it too real, sad and final. Lightning, one of my twin boy kitties, has disappeared and I'm heart broken. He and his brother Thunder occasionally would go out for an all-nighter but they always returned until recently. All too much like losing my beloved Banshee a little over a year ago.

The strange thing is that Thunder was usually my wanderer, not Lightning. Lightning was my lover cat. He loved to be held and petted. Asher could pick him up and drag him around and Lightning loved it. He would jump up in my lap if ever I gave him the chance. Lightning would always run in the house when I opened the door. I feel horribly guilty now that he is gone and most likely is not coming back that I moved them outside. I miss him terribly. They started out as inside cats but Thunder started to attack my 19 year old Queen of the house cat, Glove, so I moved them out this summer together because they were inseparable.

I still scour the sides of the roads, fields and porches for him everyday I take Asher to school. I can't imagine where he could have gone and hate to think of what my gut tells me happened. We live in the country and there are dogs and coyotes. My husband won't answer me truthfully when I ask him (about 6 million times) what he thought happened to Lightning. He tries to make me feel better and tells me maybe he got too far away from home and he's lost. Not likely.

I've called the animal control, they apparently don't pick up cats. Who knew? I've searched the animal shelter websites with no luck. Not likely again since we're 15 miles from the nearest town with a shelter. I even ask Thunder and Zoey all the time "Where is your brother?" they both look at me with their sweet innocent eyes, not a care in the world. Odd though... no grieving for them. At least not that I've noticed. How does a grieving animal act? How can they not miss him? Maybe they know something I don't. Maybe they're glad the brown-noser is gone. I'm kidding. Either way, everyone please say a little prayer that Lightning returns to me.