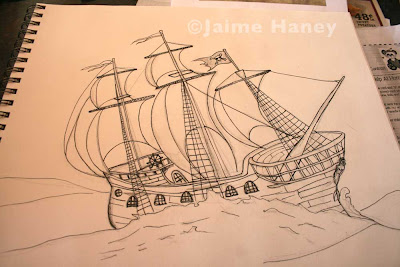 I hope everyone's Thanksgiving was wonderful. I had a rather dull one this year. We had plans to eat with Daryl's family but I had been sick and they were 7 and a half hours away, so that fizzled. I had no intention of cooking, so we had to hit the town to see what was open, and not a 2 hour wait. After checking three other restaurants we ended up at Denny's. Woo Hoo. Actually, it was really good but not terribly traditional. I got the turkey dinner, Daryl got a cheeseburger and Asher got chocolate chip pancakes. But we were all happy and we were together so that's all that matters.

On the artfront... I have been busier than a one legged man in a butt kickin' contest! I've got a show this weekend and I'm trying to get some new stuff ready for it and it is coming together rather slow. I've got new ideas but they are not quite coming together, yet.

I've drawn the pirate ship along with other pirate stuff for some boxes I'm making for boy treasure boxes. Or girl, I guess. I mean, I like pirates. Surely some girls do too.. haha 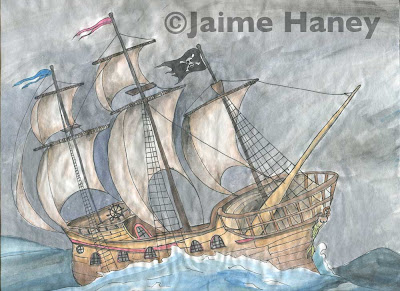 So here it is all painted in. I made the mistake of not using watercolor paper. I used 300 series Strathmore Sketch paper which says it's for watercolor pencils wet or dry, but I got a little ambitious with the water and then added real watercolors on top of it. I tried to iron it with my regular iron which helped a tiny bit, but it still looks pretty warpy. I've seen tricks where they spray the whole sheet of paper on the back with water to straighten it out, but I'm afraid to do that since it's not watercolor paper. Any suggestions?

I'll be 'round to visit all ye skally wags soon.