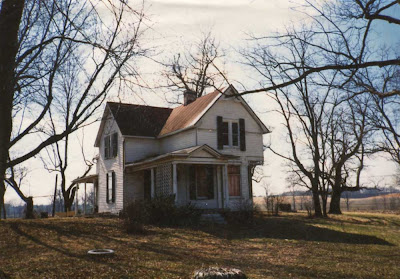 This picture is where I remember it all starting once I was out of my parents house. I was almost 21 when I moved in this old farmhouse that unfortunately has since been torn down. It was a beauty inside. Lots of original stuff inside, I'm not sure why they tore it down but I've noticed lots of old beautiful ladies like this are being torn down all the time.

I remember hearing about it from my boyfriend's (at the time) parents friend. She talked about loving it and wanting to buy it to renovate it but never did. So I looked into it and found out who owned it. I had to bug and ultimately beg the farmers who owned it to rent it out to me. It had sat empty for years. We got it for a song (rent wise). I think it was something crazy like $135 a month.

I was so excited when I finally broke them down and they agreed to rent it to me and I wanted to show my mom. I took her out there and as we were driving up to house, she started shaking her head. She never liked it from the beginning. Said it didn't sit well with her. I didn't care, I loved it. We went up to the windows to look in and see if we could get in, since I didn't have a key yet.

As we looked in the windows, we saw a black cat inside on the stairs that were positioned in the middle of the room in with the door in the kitchen. It just stared at us. My mom was very uneasy and said it didn't feel right and she wished I wouldn't move in and wanted to leave right away.

Fast forward to moving day and my boyfriend, whom I was going to share the house, and I were cleaning it out. Strangely, we never saw that cat again not even in the barn or old garage on the property. Another weird thing was that there wasn't any animal droppings inside. Not any bugs or evidence of mice. Nothing in the window sills, no spiders. I noticed it and thought it was odd.

The great old house had I guess a typical floor plan for that era. Four rooms on the bottom including a formal living room, two parlors and a kitchen. A bathroom had been added on to the kitchen later. Upstairs, there were four bedrooms. A staircase went straight up through the center of the home. The formal living room had that octagon shaped room with tall windows at angles and red stain glass as the transoms. There were red curtains and when the sun shined, it was very red inside. I called it the red room from then on. It had a gorgeous old fireplace with beautiful tile and mirror at the top. It hadn't even been painted. I loved it. I did notice that room was exceptionally colder than any other room.

We were young and loved to entertain our friends with our new house. Many get togethers were happening, mostly outside surrounding their 4 wheel drive trucks since they were all a bunch of rednecks. One particular party, I was inside watching TV and one of our friends came in the kitchen door and hollered at me that he was going to use the bathroom. Next thing I know he comes running out of the kitchen and asked me if I was jiggling the door handle. No. That was the first of many people claiming that someone tried to enter the bathroom with them in it. It happened to me while I was in the shower.

My boyfriend and I had taken one of the parlor rooms as our bedroom and had our huge waterbed set up and everything in it's place. Being so young we didn't have a lot of furniture, but more than most since my grandmother had died and left me all her furniture. I had her bed and boxed up things upstairs which we didn't use. We hadn't planned on using the upstairs, so we didn't sweep or clean upstairs.

During this time I had a young kitty named Whiskey. (partyers, remember haha) She was about a year old when we lived here. I woke up one night and she was going nuts clawing at the wall from our dresser, meowing and looking up at the ceiling. I could hear something upstairs just thrashing my boxed stuff all around. I woke up my boyfriend and he could here it too. We were both scared. We didn't know what was up there. We figured it was some sort of animal and we would find out good enough the next day. He was too scared to go up there, hee hee.

The next morning, he took a baseball bat upstairs to find out what had all gotten tore up. We kept the door to the upstairs closed so we hadn't worried about it coming in on us. I stayed downstairs! When he got up there he yelled at me to come up. I couldn't believe it, nothing had been touched. Not even the dust was disturbed. In fact, you could see our foot prints as we walked. There were the boxes with lots of sheets and fabric remnants in them. Nothing had been disturbed. We just looked at each other in disbelief.

The next night the very same thing happened. This time he went upstairs in the night with a gun. I really don't know why, but he did. When he got up there, the noise stopped and there was nothing. The next day he decided to put up a big clamp type trap up there to try to catch whatever was up there making this noise. Nothing ever set it off. I even put a chicken leg up there in the center of it and nothing ate it. We had mouse traps up there and they were never tripped. We finally just gave up and ignored it. It went away.

My cat became what I call neurotic in that house. She acted very erratic and wanted to be outside most of the time.

Once we had an inside party and everyone wanted a tour of the haunted house. So I took a bunch of about 4 upstairs and I took them into the room over the kitchen that had caught on fire at one time. You could see the walls were singed. It must not have been a bad fire, thankfully since the house was still very much intact. I had found lots of old stuff in that room from a very long time ago. A wooden ironing board, old papers, magazines and a set of very old clothing one looked like an old drummer boy outfit in dark green velvet and an old long black skirt and blouse. As we entered the room and were looking around, a very strong scent of candles burning became present. I wasn't even the one who brought it up, but there was no doubt that's what it was. Some didn't want to mess around with that and left. I found this all very intriguing and wanted to have more encounters. I welcomed it. I didn't feel anything negative.

Even back then I had a dedicated art studio in one of the parlors and had it set up perfectly. My boyfriend was working 2nd shift and I was alone at night until after midnight. I remember one night a couple of his friends came over to wait for him to get off and I was working in my studio. We were talking and I had my back to the red room and I tend to talk with my hands so they were bent at the elbow and the red room was dark behind me. As I was talking, I had the 2 guys in front of me and I just stopped and froze. They looked at me like I was nuts and I spun around and then asked them did one of you just touch me? They told me with wide opened eyes that I was white as a sheet. I had just been touched. The back of my arm had been gently squeezed.

On another occasion, my best friend Kelly had come over and was visiting me. We sat in the kitchen at the table. We had decided to read her cards. Now, I have no claim to being psychic but I do trust my gut and intuition. I had to read the instructions with the cards as I was new to tarot. What I read in her cards were a baby. She scoffed and that was that. It turns out she actually was pregnant. Crazy. We still talk about that.

So, we ended up moving out of that old house and I thought that would be the end of that, but the story doesn't end there. I'll continue with my haunting stories another time. It has occurred to me recently that it's not the houses that I live in that are necessarily the only thing haunted.