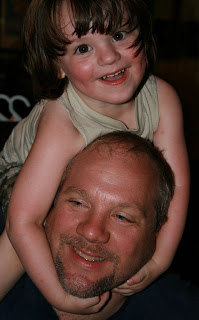 Well today started out great, because Asher let us sleep in until 11:00! But, then my mol called 20 min. later and said she was in the driveway... so much for a great day.
Got some really cute pics of Daryl and Asher. would it kill him to pick up the camera and get a picture of me with Asher once in a while? Guess so. Well, so his Father's Day was a lot better than my Mother's Day. Went to Hacienda (Mexican Restaurant) and then to a cute little park in Boonville, IN to let Asher play in the water area. When we were done playing, it was 6:20 and the thermometer read 108 degrees outside! of course that was from a black car parked on pavement but still! whew! and humid on top of that!
Also, here's some of the progress I've made on my latest effort of painting terra cotta pots. This one is going to be poppies and I think I may make the next one black eyed susies.
Posted by Jaime Haney at 10:09 PM