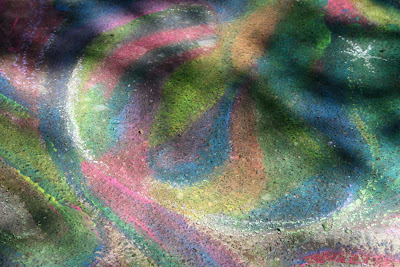 Asher and I have just discovered the joys of sidewalk paint this past Saturday. We've played around with chalk before but this sidewalk paint, let me tell you! It just knocks sidewalk graffiti up a whole notch or two in my book. From what started as whining from Asher turned out to be the highlight of my day.

You see he just found a birthday present from way back in March that I've been pushing aside. Okay I was hiding it, I admit it. It just seemed like one of those kid things that was gonna be one big mess that I had to clean up then to add insult to injury, a nice scream fest to top it off. No thank you.

But since having found it a few days prior, he's been hounding me to get this stuff out. Now you all know, I'm all for creative play. But this was Saturday and I really hadn't planned on getting out of my robe for most or all of the day. Besides it was like 50 something degrees out there... ick.

But Asher managed to talk me into it. Code for: drove me nuts until I caved. So I annoyingly got my clothes on, all the while telling him that he could do it himself and that I was going to sit inside while he did it. He accepted, just thrilled to try out the new stuff. So I get him set up and show him what to do, it came with a roller and a brush, and I went back inside to do more lounging. 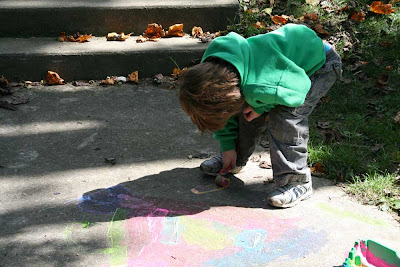 Well I started to feel a twinge of guilt since he is now in school and I really don't spend much time playing like that anymore with him. I looked out the window and he looked so cute slopping the paint and rolling away. Not only that, I started to get a little envious. He painted with abandon. Sloshing paint this way and that. What fun! So I went out there and asked him if I could join in. Happily, he said I could and then proceeded to tell me I could use the brush because he like the roller. Yippee! So it began.
Of course he was totally tired of it within 10 minutes, so I thought well I don't want to waste the paint that had already been poured out so I kept painting (about 30 minutes) and came up with what you see here. I still ended up having to clean it all up, but hey, it was well worth it. 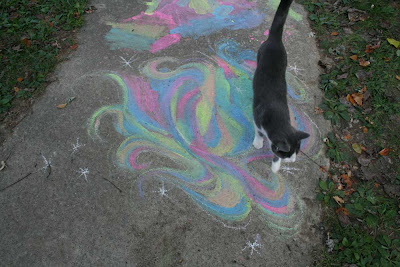 Just so you know, it looks much prettier when sidewalk paint is wet. The dog trotted all over it, but it surprisingly dries fast. The cat couldn't care less. It's amazing the color combinations you can create with hot pink, blue and yellow... although it takes a little extra work. Also, I don't think it's gonna come off. Oy!